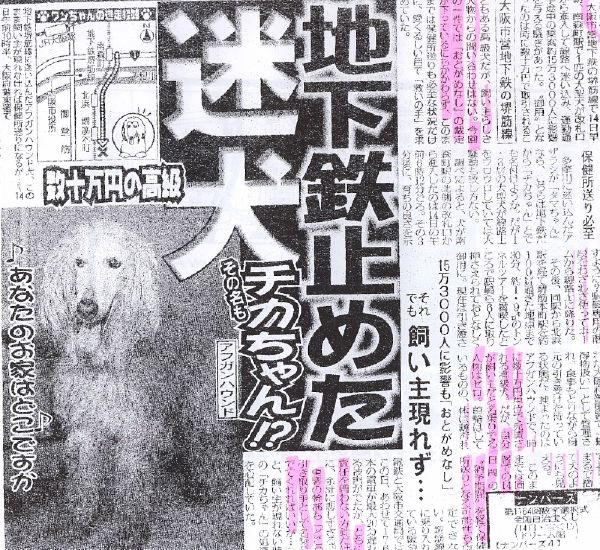 Unless your reading of Japanese is excellent I shall explain this story. Back in 2002 my little sister in Nara Japan emailed me this article with an English translation. It seems that on a summers day in August a person was walking their Afghan Hound near Osaka station in central Osaka during early morning peak hour, (I would never do that having been there and experienced the noise and activity).

Anyway, the hound broke loose from the walker and took off into the crowd and apparently entered the main entrance of Osaka Station. Accounts of what happened next are varied and bizarre, however the dog found its way down into one of the many subways running beneath the central station, leapt off a platform and took off up the tunnel. Fortunately for the dog a very efficient emergency lock down system was immediately activated. ( I will not explain why the Japanese have such systems but if interested you can find out)

At some point during the next half hour the dogs exploration of the subway system ended when it emerged up onto a platform at another station and merged with a very packed waiting group of stranded passengers.

Police arrested the dog and escorted it to a police station. Meanwhile the entire railway network of central Osaka was halted and took some time to restart.

The cost of this activity was several million Yen as chaos reigned across the city for hours, and apparently the instigator of interruptions to the subway system are charged for the cost. The dog’s beloved could not be traced and for obvious financial reasons the owner never turned up to be re-united with the poor pooch.

Having an Afghan Kara living with us at the timeI felt for the dog knowing what lovely and adventurous dogs they are and what a nightmare unfolds when they escape into suburbia, believe me its scary. Also the experience would have traumatised the lovely hound. Anyway our Afghan Kara was a special guest on the website of an Afghan Hound living in Osaka. We contacted them to find out the destiny of this dog and were kept informed across the following days.

Apparently the dog became famous across the country with Afghan Hound lovers leading the call to save it and  eventually the disruption costs were withdrawn by the police. Offers to house it came from across Japan and abroad and eventually the dog was resettled. My little sister suggested hopefully it may have been the original owner, I hoped so too.

This is my co-contribution to  RonovanWrites Weekly Haiku Poetry Prompt Challenge 103 Summer & Fun a creative forum for haiku artist across the world to home in and accept Ron’s challenge each week. Have a look at the poetry  here https://ronovanwrites.wordpress.com/2016/06/27/ronovanwrites-weekly-haiku-poetry-prompt-challenge-103-summerfun/

And also my contribution to the 52 week image challenge this week PLAY, and would that dog be playing? maybe. See other playful images here at Wild Daffodil’s blog https://daffodilwild.wordpress.com/photo-challenge/