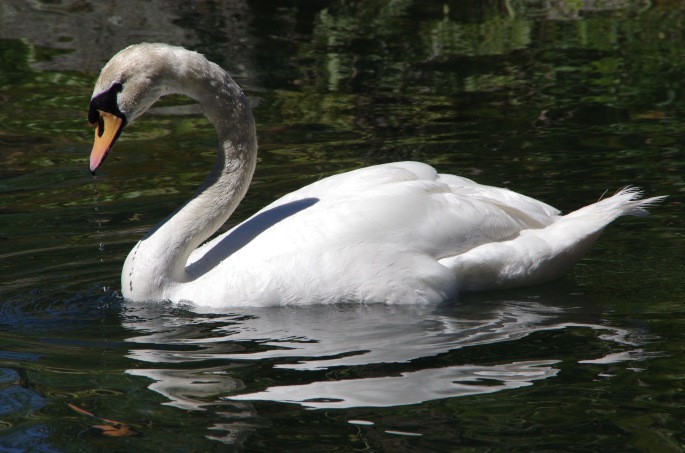 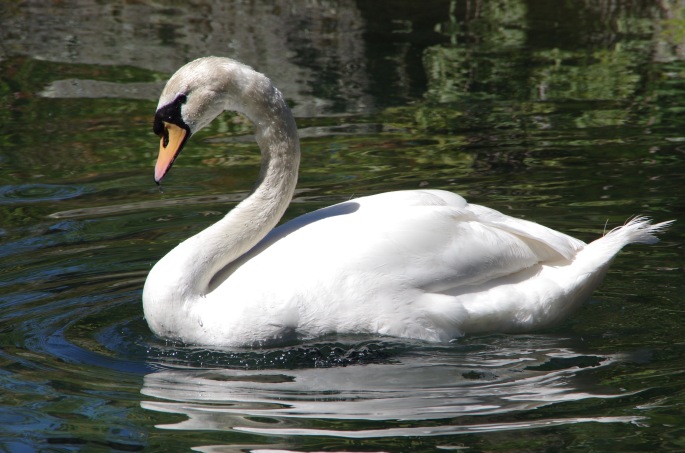 Most of New Zealand’s rare birds are included in the conservation programme at Rainbow Springs in Rotorua. Because we were not going to the South Island and mainly planning to experience culture in 4 cities the Rainbow Springs  programme appealed to us and also was a chance to look close up at Kakapo, Kea, Kaka and Weka. Luckily we saw all of these mainly in walk through enclosures as well as  Kiwi in their special light controlled breeding area.  There are many  water areas in this park and trout are bred here as well. As we wandered along beside a waterway this White Swan gracefully glided past. There was no mention of White Swans in the brochure material and park notices. Black Swans are a common Australian Bird have been introduced quite successfully into New Zealand but Northern Hemisphere White Swans are almost non existent in both countries. This is the only example of the bird either of us has ever seen. Whilst Black Swans are beautiful and graceful there is something exceptional to suddenly come upon a white one in Australia or New Zealand. 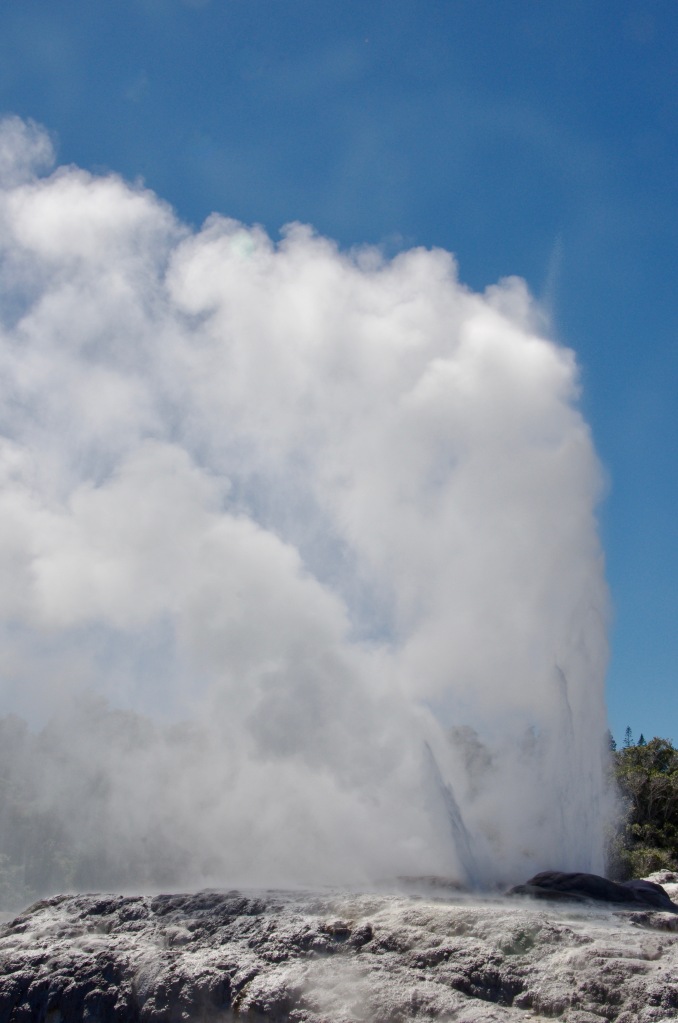 This is the Pohutu geyser at Te Puia near Rotorua in central North Island of New Zealand. It erupts once or twice an hour sometimes reaching up to 3o metres in height. This area of the North Island is rich in geothermal activity with an aroma of sulphur often drifting over the city .

The Maori first arrived in New Zealand (they call it Aotearoa) around 1000 years ago by canoe from one or more of Hawaii, Tahiti and the Cook Islands. There were many migrations over the following centuries. As they travelled around the islands and into the North Island the Maori encountered volcanic and geothermal activity. Their stories and legends passed down indicate they were very familiar with this geographic phenomena and earthquakes. They immediately made spiritual connections with hot springs, geysers, mud pools and volcanoes.  Maori people of the central North Island around Rotorua tell of the High Priest Ngatoroirangi who called to his sisters Te Hoata and Te Pupa from his homeland of Hawaki. They appeared to him above the ground in the form of this geyser and according to stories also created the other geysers, thermal springs and volcanoes.

This is my contribution to the 52 week Photo Challenge the last one for 2016 is SPIRIT and boy do a lot of us need some. See the other brilliant images for SPIRIT at https://nanacathydotcom.wordpress.com/2016/12/29/photo-challenge-spirit/#comments For next years challenge planned by Cathy and Sandra visit Cathy’s blog at  https://nanacathydotcom.wordpress.com/one-a-week-photo-challenge-2017/

Looking across the downtown area of New Zealand’s capital city Wellington. This has to be one of the most picturesque capital cities in the world. Both views are from the Botanic Gardens. Everywhere you look are hills and trees with the city stretching around bays and up valleys giving people views from almost anywhere they are. Even the international airport is aesthetic with a single runway stretching across an isthmus. Only Hobart in Tasmania and Nagasaki in  Kyushu Japan approach Wellington for my top city awards and both are located in similar topography. There is so much to see and do in Wellington and all in a relaxed lifestyle.

This is my contribution to Cees Weekly Foto Fun Challenge Roofs. To see the prompt visit https://ceenphotography.com/2019/08/27/cffc-roofs/ 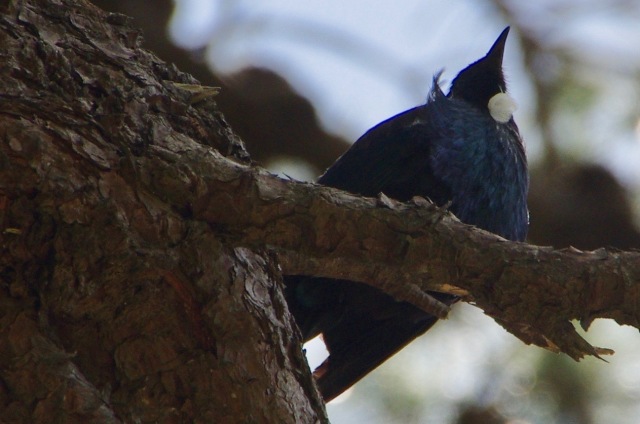 through song and movement 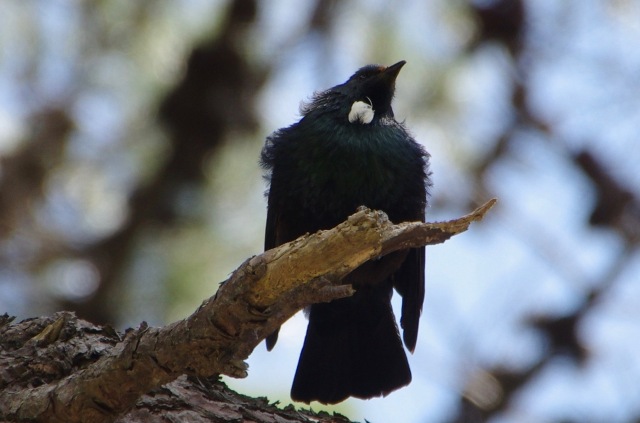 Whilst we were in New Zealand to experience culture,  birds were always in the back of our minds. We are spoilt in Australia for variety and breadth of species when it comes to birds. However the Tui stole our hearts in new Zealand. It is a beautiful bird, with a metallic dark green and blue plumage.  The wonderful white napkin on the throat gives the Tui a distinctive identity.However the song produced by the Tui outshines the beautiful plumage. No bird in Australia produces a sweeter more distinctive sound than the Tui. They are very common in the North Island and we quickly learnt to  identify their calls however they were quite elusive to photograph. This bird was in the Wellington Botanic Gardens and was the only one I was able to get a reasonable photo of. 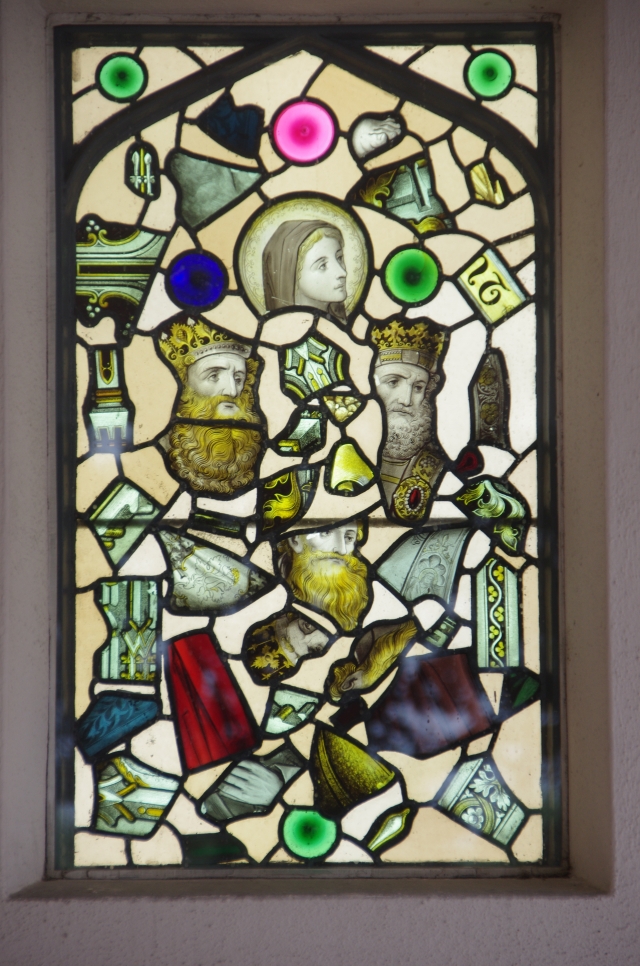 This small stained glass  window captures your attention at the entry of Waipu Cathedral in Napier New Zealand. The work of art was constructed of stained glass fragments collected by parishioners after the devastating 1931 earthquake. The cathedral was destroyed and so were most of the original large stained glass windows. While we were staying in Napier recently Jill felt 2 tremors, just more of the 250 plus tremors  after the latest big quake struck Kaikoura on the East coast of the South Island in early November seriously impacting on the people and infrastructure of that region. New Zealand lies right along part of the Pacific Rim of Fire with earthquakes and volcanic activity being a constant reminder to the brave people who live there. 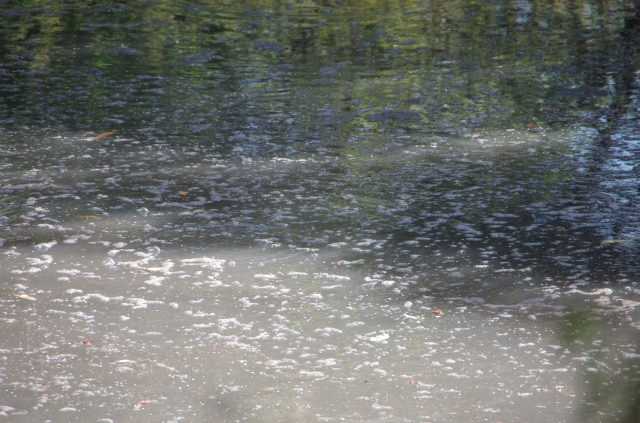 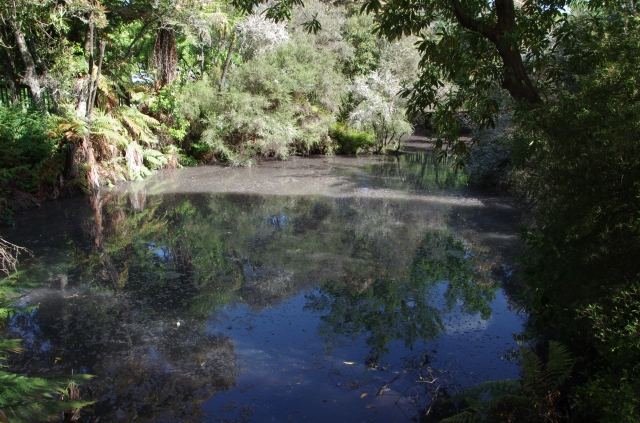 Sulphurous geysers gently bubble to the surface in fenced off sections of Kuirau Public Park in Rotorua New Zealand. Maori first used these geothermal springs for health and cooking across many generations after arriving in this area. Later in the C19th The English arrived in Rotorua and quickly took opportunities to utilise the hot springs for various health related issues and commercial opportunities.

Today Rotorua in the middle of the North Island is an essential stop for visitors to New Zealand for learning about and experiencing Maori culture and to confront serious geothermal activity.

Jill and I spent 3 fascinating days in Rotorua during our recent first visit to New Zealand. For those who follow this blog and also whose blogs I follow that is the reason I have been out of communication for some weeks. I am back now and will share more of our New Zealand experiences  with haiku for a while.